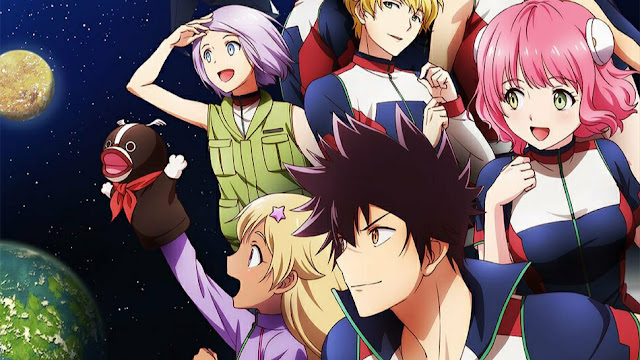 Lerche Studio will animate the project. Lerche is known for animating Assassination Classroom and Classroom of Elite anime series.

The series will release in July 2019 along with other anime titles like Fire Force, Vinland Saga and Teasing master Takagi-san.

Masaomi Ando will direct the anime for Lerche. While Norimitsu Kaih will be in charge of Series Composition.
Keiko Kurosawa (Re:␣Hamatora, Scum’s Wish, Asobi Asobase) will provide character designs and will act as Chief Animation Director.

The story focuses around Kanata Hoshijima and his friends who during exploration trip gets lost in the depths of dangerous space.
“Itʼs the first day of Planet Camp, and Aries Spring couldnʼt be more excited! She, along with eight other strangers, leave for Planet McPa for a weeklong excursion. Soon after they arrive, however, a mysterious orb appears and transports them into the depths of space, where they find an empty floating spaceship…”

Written and Illustrated by Shinohara, Astra Lost in Space is a Japanese Shonen manga published in Shonen Jump+ online manga service. The manga ended in December 2017, compiled into 5 volumes (49 Chapters).

Viz Media is publishing the English release to manga, online and print. The manga is ranked 3rd by Kono Manga ga Sugoi! (This Manga Is Amazing!) guidebook and also packed the 12th Manga Taisho awards earlier this year.