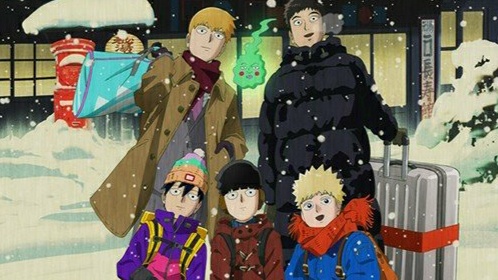 The upcoming original “Mob Psycho 100 II” or “Mob Psycho 100 Season 2” OVA revealed a new visual along with its release date. The OVA will shipped with Blu-ray/DVD box releasing on September 25.The Season 2 OVA is titled— “The First Spirits and Such Field Trip ~A Journey that Mends the Heart and Heals the Soul“. Have a look at the Visual:

In the visual we see our main cast members with Mob in the center, Ritsu on left, while Teruki on right. It looks so adorable seeing Serizawa already getting along with Mob and co. Also it seems like Mob and the group will visit one of the snowy mountains either for business purposes or relaxing where they will encounter some spirits.

The new OVA will get a special advanced screening at a special Psycho Helmet Cult event set to take place this July. The OVA will be an original story written by author ONE himself. The OVA was announced after the release season 2 finale episode.

Written by ONE, the webcomic artist also known for writing One Punch Man, Mob Psycho 100 is a Japanese manga published in Ura Sunday magazine since 2012.

The story centers around Eighth-grader Shigeo “Mob” Kageyama has tapped into his inner wellspring of psychic prowess at a young age. But the power quickly proves to be a liability when he realizes the potential danger in his skills. Choosing to suppress his power, Mob’s only present use for his ability is to impress his longtime crush, Tsubomi, who soon grows bored of the same tricks.In order to effectuate control on his skills, Mob enlists himself under the wing of Arataka Reigen, a con artist claiming to be a psychic, who exploits Mob’s powers for pocket change. Now, exorcising evil spirits on command has become a part of Mob’s daily, monotonous life.
However, the psychic energy he exerts is barely the tip of the iceberg; if his vast potential and unrestrained emotions run berserk, a cataclysmic event that would render him completely unrecognizable will be triggered. The progression toward Mob’s explosion is rising and attempting to stop it is futile.

Studio Bones adapted the same into two TV anime series consisting of 12 and 13 Episodes along with 1 OVA episode.