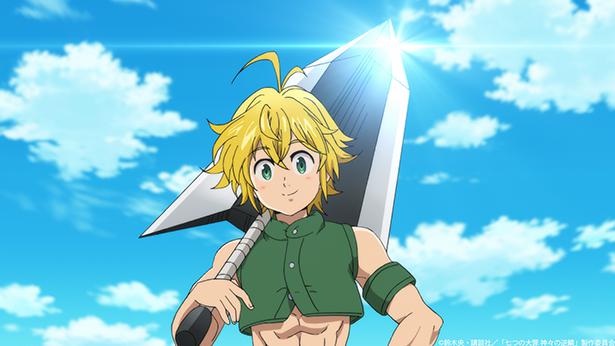 While the new trailer gave us first look at our favorite characters in motion. Fortunately enough there hasn’t been any major change in art style but seems like we will be robbed of smooth fight animation similar of last two seasons due to change of production studio from A-1 pictures to Studio Deen.

Author Suzuki stated in August interview Kadokawa‘s Da Vinci magazine that he is planning on concluding The Seven Deadly Sins manga in “about a year,” after about 40 volumes’ worth of story. The coming season is said to adapt whole source material.  The Seven Deadly Sins: Wrath of The Gods will start by adapting 14th arc- The Memories of Holy Arc War from Chapter 198 to 216. The first episode will receive pre-screening during a event on September 22 along with Haikyu season 4 premiere.

Written by Suzuki, Seven Deadly Sins is Japanese Shounen manga published in Kodansha’s Weekly Shounen Magazine since 2012. The Seven Deadly Sins were once an active group of knights in the region of Britannia, who disbanded after they supposedly plotted to overthrow the Liones Kingdom. Their supposed defeat came at the hands of the Holy Knights, but rumors continued to persist that they were still alive. Ten years later, the Holy Knights staged a coup d’état and captured the king, becoming the new, tyrannical rulers of the kingdom. The third princess, Elizabeth Liones, then starts out on a journey to find the Seven Deadly Sins and enlist their help in taking back the kingdom from the Holy Knights.

‘Nanatsu no Taizai: Fundo no Shipnan’ Season 4 Release Date and...