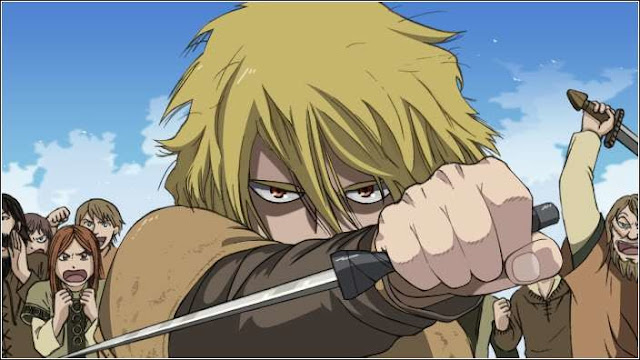 The official site to “Vinland Saga” anime revealed a third promotional trailer. The new trailer previews theme song “MUKANJYO” by Vocal group Survive Said the Prophet. The site also revealed that the first three episodes will be aired together on the release date. A second key visual and trailer was revealed during April.

The series slated to release on 7th July 2019 on NHK general channel. Along with this it will be available worldwide on the Amazon Prime streaming service.

Also it will be a 2 cour anime series consisting of 24 Episodes. Wit Studio, the studio behind Attack On Titan, Kabaneri of Iron Fortress and The Ancient Magus Bride will be in charge of animating the series.

Coincidentally, the anime will taking over the same time slot as of Attack On Titan as soon it will finish its 10 episode broadcasting.

Cast members includes Shizuka Ishigami voicing the Young Thorfinn , while Yuuto Uemura will be charge of voicing grown up Thorfinn. And Kenichiro Matsuda voicing the side character Thors.

Naoya Uchida as Askeladd, the head of a band of 100 Vikings, Kensho Ono as Canute, the prince second in line to the Danish throne, Akio Ohtsuka as Thorkell, the general known for his extraordinary physique and strength and at last Hiroki Yasumoto as Bjorn, an old veteran who assists Askeladd in leading his band.

Yukimura launched the series in Japan in Kodansha’s Weekly Shōnen Magazine in 2005, but Kodansha moved the series to Kodansha’s Monthly Afternoon magazine later that year. Kodansha published the manga’s 21st Japanese compiled book volume on August 23. The series has more than 5 million copies in print.

“Thorfinn, son of one of the Vikings’ greatest warriors, is among the finest fighters in the merry band of mercenaries run by the cunning Askeladd, an impressive feat for a person his age.

However, Thorfinn is not part of the group for the plunder it entails—instead, for having caused his family great tragedy, the boy has vowed to kill Askeladd in a fair duel.

Not yet skilled enough to defeat him, but unable to abandon his vengeance, Thorfinn spends his boyhood with the mercenary crew, honing his skills on the battlefield among the war-loving Danes, where killing is just another pleasure of life.

One day, when Askeladd receives word that Danish prince Canute has been taken as a hostage, he hatches an ambitious plot—one that will decide the next King of England and drastically alter the lives of Thorfinn, Canute, and himself.

Set in 11th century Europe, Vinland Saga tells a bloody epic in an era where violence, madness, and injustice are inescapable, providing a paradise for the battle-crazed and utter hell for the rest who live in it.”