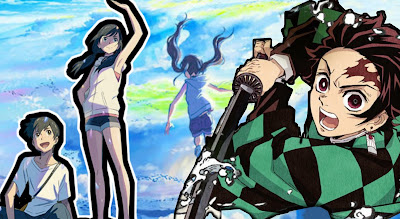 Shonen Hit Kimetsu no Yaiba(Demon Slayer) won the Television category while Makoto Shinkai’s Weathering With you film won the animated film category. Judges narrowed these two titles among the 439 other titles which debuted between October 14, 2018 and September 30, 2019, to a field of 80 television anime and 20 theatrical film releases.

The winners of the individual awards are as follows:

Released on July 19th 2019, Weathering With you (Tenki no Noko) is an anime film written and directed by renowned anime director Makoto Shinkai. Film has grossed about $6.7 million in North America.

The film’s story centers around the high school student Hodaka who leaves his home on an isolated island and moves to Tokyo, but he immediately becomes broke. He lives his days in isolation, but finally finds a job as a writer for a shady occult magazine.

After he starts his job, the weather has been rainy day after day. In a corner of the crowded and busy city, Hodaka meets a young woman named Hina.

Due to certain circumstances, Hina and her younger brother live together but have a cheerful and sturdy life. Hina also has a certain power: the power to stop the rain and clear the sky.

Animated by ufotable, Kimetsu no Yaiba: Demon Slayer is a Shonen series debuted during Summer 2019 and had a successful running of 26 episodes. A sequel movie is in production.