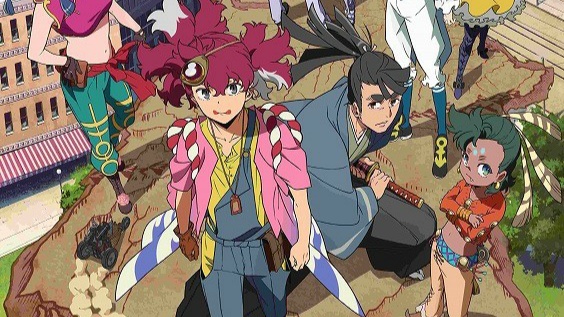 Studio P.A. Works is that one studio which brings up a visual blockbuster and this spring 2020 they will be delivering action Wild West Racing- samurai anime Appare-Ranman!. Appare-Ranman! recently released a new promo video which revealed it’s exact release date. Appare-Ranman! release date is on Friday- April 10, 2020. A new key and visual and theme song artists also revealed.

The trio Mia REGINA perform the anime’s opening theme song “I got it!” while Showtaro Morikubo performs the ending theme.

The story takes place the end of the 19th century and on the eve of the next one. After a certain mishap, the brilliant but socially inept engineer Sorano Appare and the shrewd but cowardly samurai Isshiki Kosame find themselves drifting on a boat from Japan to America.

Broke, the two decide to compete in the Trans-America Wild Race to win the prize and return to Japan. The two battle crazy rivals, outlaws, and the great outdoors itself as they race through the wild West from the starting line in Los Angeles to the finish line in New York — in the steam-powered car they built.

The varied cast of Appare-Ranman! Includes:

Takahiro Sakurai as Dylan G. Ordene, also known as the “Heroic Dylan,” one of the legendary “Thousand Three” outlaws. The major automobile company GM has hired him to participate in the race, at the wheel of their specially made vehicle. He is one of the favorites to win first place. He personally has no great interest in racing, but he thinks the vivacious Appare is interesting enough. He is a man of few words, but his gunslinging skills are beyond question.

Tomokazu Sugita as TJ, one of the legendary “Thousand Three” outlaws. He is known and feared as “Crazy TJ,” both for his outlandish fashion and hairstyle, to his tendency to jump into danger even knowing the risks. He is employed by the Iron Motor automobile company to take part in the race. He feels a kinship with the brash Appare, especially with regard to crazy hairstyles.

Kazuyuki Okitsu as Seth Rich Cutter, an employee of the GM automobile company, and one of the organizers for the race. He is the one that proposed the race to the company’s upper management as a way of showing off the company’s work by winning. To publicize the race, he has spared no expense to organize parades, plan festivals, and hire Dylan. He has past experience as an engineer designing race cars.

Natsuki Hanae as Sorano Appare (family name first), a 19-year-old man who grew up in a rural seaside town. He has been interested in machines since childhood, and has produced his own machines by hand. Though he is a genius mechanic, he has little interest in social interaction, considering machines as closer friends than other people. He often loses all track of time and surroundings once he starts tinkering, but abruptly falls asleep as if running out of batteries when he gets tired, which causes no end of consternation to Kosame. He has an idealistic dreamer side, having treasured a story about travel to the moon since childhood.

Seiichirō Yamashita as Isshiki Kosame (family name first), a 21-year-old man, and low-ranked government official who lived in the same town as Appare. He is a master of cooking, cleaning, and laundry, due to having lost his mother early on and having to take care of his father and sister. He is a straightforward man who is often prone to worrying about his friends, and this often leads to him being led around by Appare. Though initiated into the hantsuki ittō-ryūstyle of swordsmanship, he doesn’t get into fights often. According to his father, he has been promised in marriage to a beautiful fiance which he has never seen.

Aoi Yūki as Hototo, an intensely proud 11-year-old Native American boy. He is on a lone journey for revenge, but meets Appare and Kosame in his journeys. He is mature for his years, which leads to him disliking being treated like a child. He will not hesitate to fight anyone, even adults, to protect what he loves. Having inherited his skill of living off the land from his grandfather, he is capable of foraging for food and water, making his own weapons, and reading the terrain and climate. He has great respect for Appare, who seems to not be driven by the whims of society.

Sora Amamiya as Jin Xiaoleng, the only female racer in the Trans-America Wild Race. She was born to Chinese immigrants who run a laundromat. She began doing odd jobs for various racing teams as a starting point to her strong desire to be a racer herself, but began to become worried when she started losing opportunities due to being a woman. She had halfway decided to give up until she met Appare. She is a master of both her self-honed driving technique, and the martial arts that her father taught her.

Fumiko Orikasa as Sophia Taylor, a gentle-hearted girl who watches over Al by the order of his father. He has been friends with Al since childhood, and they share a relationship close to siblings, often serving to stop Al before his schemes run out of hand. She has an unexpectedly curious and active side to her. While she wishes for Al to win the race, she also wishes for the safety of Al and his friends.

If you are unfamiliar with Appare-Ranman!, it is an original anime work by P.A. Works. It is an Wild West Racing themed story takes place during the back-end of the 19th century, the genius but socially awkward engineer Sorano Appare and the wise yet cowardly samurai Isshiki Kosame find themselves drifting in the sea between Japan and America. With no money, the duo decide to enter the Trans-America Wild Race to win the prize money so they can get home. The two encounter rivals, bandits, and challenges in the wilderness as they race through America, from the starting line in Los Angeles to the finish line in New York, in the steam-powered car they built.

Takeshi Kikuchi and Daijō Kudō are credited with project planning, with APPERRACING with the original story concept. Masakazu Hashimoto is directing the series at P.A. Works. Character designs by Yurie Oohigashi who is also acting up as chief animation director. Shiho Takeuchi is credited with drawing mechanical drawings. Miho Sugiura is directing the art. Satoki Iida is credited with directing sound with Evan Call who also worked on Violet Evergarden is composing the music.