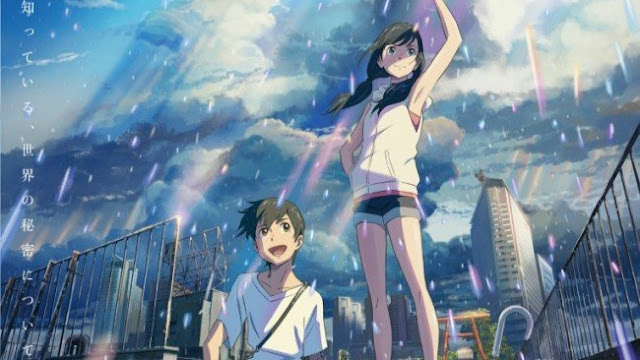 Ever since the release anime movie Your Name, fans have been impatiently waiting to see more of Makoto Shinkai’s work.

Luckily, Shinkai will be returning with his new movie “Tenki no ko” or “Weathering With You“ this Summer. The movie will release on July 19th. Accordingly a new key visual to movie has been released.

RADWIMPS is the same group which performed Your Name’s opening theme “Zenzenzense” which was one the most-selling song that year.

Also Shinkai confirmed that the movie will receive a global release. And the releases have already been decided for North America, Europe, Asia, and South America. While GKIDS are licensing the North American release.

The film’s story centers around the high school student Hodaka who leaves his home on an isolated island and moves to Tokyo, but he immediately becomes broke. He lives his days in isolation, but finally finds a job as a writer for a shady occult magazine.

After he starts his job, the weather has been rainy day after day. In a corner of the crowded and busy city, Hodaka meets a young woman named Hina.

Due to certain circumstances, Hina and her younger brother live together but have a cheerful and sturdy life. Hina also has a certain power: the power to stop the rain and clear the sky.

Makoto Shinkai is directing and writing the movie for CoMix Wave film Studio. While Masayoshi Tanaka(Your Name) will be providing the character designs.

Atsushi Tamura is the animation director. Meanwhile Hiroshi Takiguchi(Garden of Words) is credited as art director.