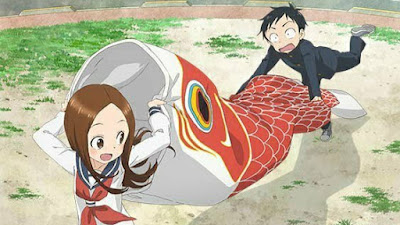 As we look at the visual we find our main cast member Nishikata helping Takagi in  flying the traditional Japanese kite Koinobori.

Director Hiroaki Akagi will return to direct the new season for Shin-Ei Animation Studio. Also Une Shinya will act as Assistant Director along with Aya Takano as the character designer. Meanwhile Hiroaki Tsutsumi will provide the music.

Also Rie Takahashi and Yuuki Kaji, the voices of the titular character Takagi-san and Nishikata, respectively, confirmed that they are also returning for the second season.

The February issue of Shogakukan‘s Monthly Shonen Sunday announced the series will be receiving a season two. Later a promotional trailer went live on the April fool’s day.

A 12- Episode anime adaptation produced by Shin-Ei Animation studio aired during Winter 2018. A original video animation of “Water Slide” chapter was later released in July 2018. The series is available on Crunchyroll streaming service.

“Tired of being mercilessly teased by his classmate Takagi, Nishikata has vowed to get her back and successfully tease the girl that’s made him blush countless times.

After all, if you blush, you lose! But getting vengeance isn’t so easy when every attempt blows up in his face. Will Nishikata ever make Takagi blush or will he gain something more fulfilling from his bumbling attempts?”